Alma A. Albright, 98, of Allentown, passed away Monday, January 2, 2017 peacefully surrounded by her loving family in her home. She was born in Allentown a daughter of the late Fannie (King) and Alvin A. Albright, Sr. Alma was a graduate of Allentown High School Class of 1936 and Moravian College Class of 1940. She was employed as a supervisor of the Central Transcribing Bureau Sales Department in the corporate sales office of Bethlehem Steel for 40 years before retiring in 1982. She was a lifetime member of the former St. Michael's Lutheran Church, Allentown, where she and her sister Margaret taught Sunday School for many years. She was a member of the Women of St. Michael's where she served as an officer. Alma was also an officer for the Moravian College Allentown Alumni Association. She was active in the Ladies Church Bowling League. After retiring she spent many entire summers vacationing, in Margate, NJ. Alma enjoyed crossword puzzles, reading, cruising and traveling with her sister to many parts of the U.S., Canada, Mexico and gambling in Atlantic City and Las Vegas.

Survivors: Brother: Alvin A. Albright, Jr. of Allentown; nephew, Danton A. Ponzol and his wife Kimberley of Durham; niece, Suzanne E. Finch and her husband Christopher of Allentown; four great-nephews, Benjamin A. Finch, Dante A., Danton A. and Daniel A. Ponzol and three cousins, Mary Bishop of Allentown, William Hall of St. Cloud, FL and Margaret Flippen of Sun City Center, FL. She was predeceased by sisters Shirley A., Alice A. and Margaret L. Albright and Elizabeth H. Ponzol. 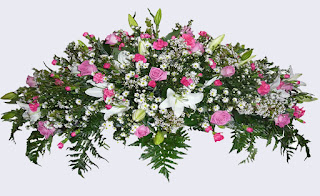 At about 4:05 I received a text message sent to me and Barbara from Wendie indicating that someone that lives on 10th Street had reported a new sinkhole at 10th and Gordon. At 4:15 p.m. I was walking out the door on my way to the cemetery.

When I drove north from Hamilton on 10th street, I encountered a Police vehicle blocking 10th Street to traffic. I proceeded to the back gate and entered the cemetery from Poplar Street and proceeded to 10th and Gordon. Several Police Officers were on scene and I had a ring side seat to the sink hole.

Other than the three officers no one else from the city was on scene, it being a Saturday afternoon. The first official on scene was Mayor Ed Pawloski, much to his credit.

The sink hole, which was approximately 3 feet in diameter, was pretty much centered on Gordon Street at the intersection with 10th Street. It was about even with the sidewalk curbing on 10th Street. In other words it did not protrude into 10th Street.

Several officers I spoke to indicated that the hole appeared to be about 8 feet deep with an underground diameter of approx. 10 feet. When the City engineer arrived he pretty much confirmed the dimensions and indicated that he did not deem it a serious situation.

He informed me that the plan was to cover the hole with a large metal plate. Gordon Street would remain closed from the alley to 10th Street. Tenth street would be open to traffic but blockades would be erected to prevent vehicles from turning onto Gordon Street. Excavation is planned for early Monday morning. With that pronouncement I locked down the cemetery and went home arriving about 6 p.m.

Photos of the new sink hole are shown below:

Take note that the Mayor is wearing white pants and a green shirt. The principal City engineer on site is wearing a bright red shirt. 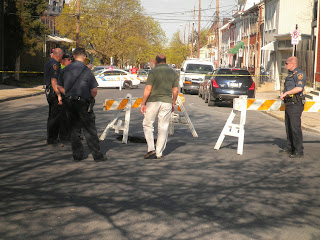 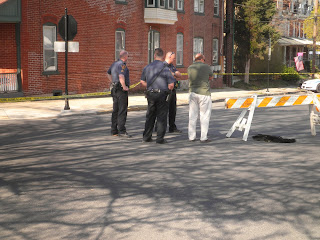 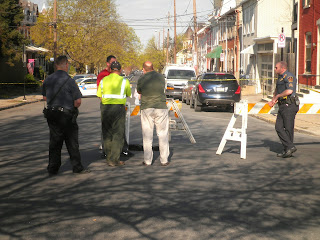 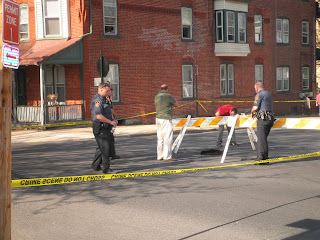 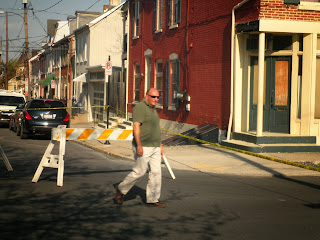 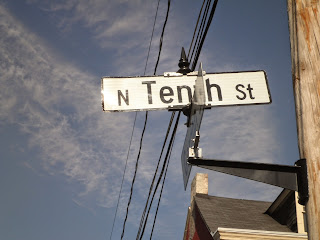 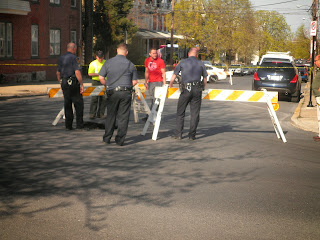 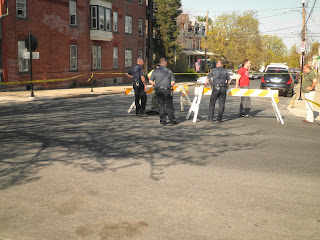 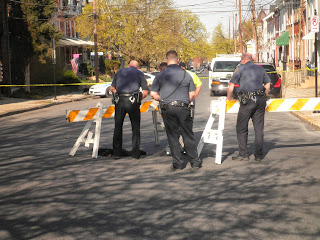 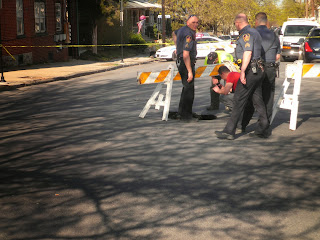 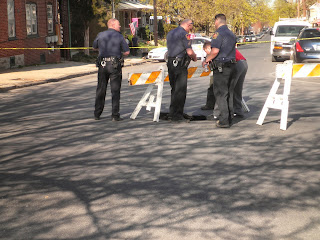 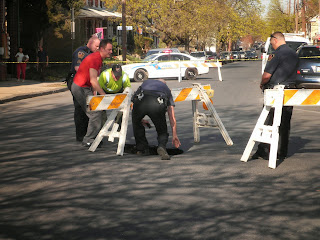 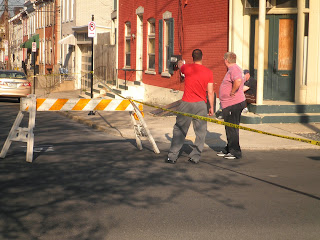 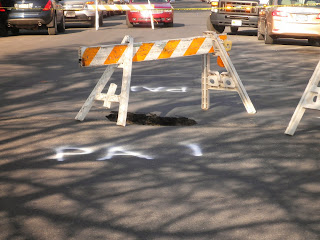 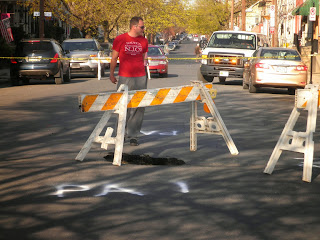 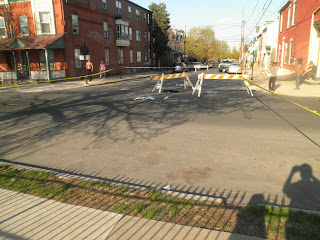 The City engineer assures us that the problem is relatively minor and they will excavate until they locate the core and then they will fill the hole with grout. It should be noted that this sink hole is north and east of the 2010 sink hole.

Let's pray that the City engineer is correct!

The Cemetery is Open To The Public


The Cemetery is Now Open to the Public

You are Welcome to visit the Union and West end Cemetery at your convenience during daylight hours.

We apologize for the inconvenience and hope that you will visit the cemetery soon and often!

The Old Allentown Preservation Association (OAPA), in an effort to enhance the beauty of the Union and West End Cemetery, obtained a grant from the City of Allentown for the purpose of planting roses inside the fence line along Chew Street. The project called for the planting of 142 rose bushes, 138 roses were planted every 9 feet along the Chew Street fence. The remaining 4 rose bushes were planted in a bed next to the Civil War Naval cannons in the Grand Army of the Republic section (under the flag) of the cemetery along 12th Street.

Volunteers from OAPA and the Cemetery Association, along with able-bodied help provided by volunteers from the Allentown Community Correction Center and the Keenan House worked hard and diligently over a number of weekends to create a rose bed the entire length of the Chew Street fence. Earth was turned, holes to receive the roses were dug, mulch (provided by the Parks and Recreation Department of the City of Allentown), was spread in preparation for the planting of roses.

On June 1st, with the rose bush bed ready, the volunteers gathered and planted all 142 rose bushes in a single morning session. The resultant rose bed is stunningly gorgeous; beautifying the walk along Chew Street from 10th to 12th Streets. The small garden at the cannons (GAR Section) also reflects the glory of the beautification project.

The following photos show the results of the activity in the cemetery from inception to the final planting of the roses :

The photos that follow were taken on May 29, 2014 in the Union and West End Cemetery. Unfortunately the winter of 2013--2014 was not kind to this flag that flew over the United States Capitol approximately 14 months ago.

A new flag has been acquired and will be run up the flag pole tomorrow during a Memorial Day Ceremony in the cemetery. Memorial Day is being celebrated by Chapter 190, the Military Order of the Purple Heart on the traditional date for Memorial Day celebrations.

Come out to the Union and West End Cemetery tomorrow May 30, 2014, and enjoy the Memorial Day Ceremony.